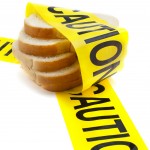 Gluten is a mixture of proteins present in some cereal grains, especially wheat. It consists almost entirely of two proteins, gliadin and glutelin. The exact proportions depend upon the variety of grain. It is responsible for making bread springy. However, gluten does not agree with everyone. Some digestive problems are associated with a gluten intolerance such as celiac’s disease. Gliadin has several components. It is a syrupy substance that binds the dough. Gliadin is also the protein in rye flour and in a wheat-and-rye blend called triticale.

What is a gluten intolerance?

A digestive tract that cannot tolerate gluten is characterized by malabsorption due to damage to the small intestine. When gluten intolerance becomes an extreme condition, it is called celiac’s disease, non-tropical sprue, or gluten-sensitive enteropathy. Symptoms may include weight loss, greasy and foul-smelling stools, and diarrhea. There are often multiple vitamin and nutrient deficiencies. Eczema-like skin conditions usually occur with a gluten intolerance.

One of the hallmark signs of celiac’s disease is iron-deficiency anemia and extreme fatigue, not corrected by iron supplements. Also present are low serum calcium levels. Breast-fed children, along with delayed introduction of cereals and cow’s mild, can provide a protective effect ant greatly reduces the risk of developing gluten intolerance. Most children diagnosed with celiac’s disease experience relief soon after starting a gluten-free diet.

Dermatitis, herpetiformis, psoriasis, irritable bowel syndrome, and inflammatory bowel disease may also be the results of a gluten intolerance. It is a common problem for food-sensitive individuals and can trigger more symptoms such as fatigue, joint pains and headaches. There has recently been an association between gluten intolerance and lichen planus.

Am I sensitive to wheat because it contains gluten?

What other foods besides wheat contain gluten?

Oat, rye, most beers, Postum, products containing cereals, barley, and anything containing barley malt, triticale, kamut, spelt, and possibly teff. Products derived from cereal grains are likely to contain gluten. People who are not able to eat other gluten-containing grains can often tolerate spelt and millet. Spelt is one of the easiest grains to digest. Check with your health-food store for availability.

Millet has small amounts of gluten, but virtually no gliadin. Malt comes from sprouted barley and from the hydrolyzed starch of other grains. Barley contains hordein, a protein with similar properties to gliadin. Hordein is so similar to gliadin that it should be avoided by people intolerant to gluten.

What gluten-containing flours should I avoid?

What gluten-containing pastas should I avoid?

Artichoke, durum, semolina, secale, spelt, wheat. If you are in doubt about the contents of a four product, write or call the company that makes the product before using it. Read labels!

What are some substitutes for gluten-containing grains?

What are some gluten-free flours?

They are arrowroot, kudzu, amaranth, rice, garbanzo (chick pea), quinoa, corn, potato, soybean and other bean flours, and all nuts and seeds. Make sure these flours are wheat-free. It is common to find wheat added to other types of flours.

What about other food intolerances?

People who cannot tolerate wheat fiber or gluten often have delicate stomachs or intestinal linings. This creates sensitivity to many foods. They may experience difficulty tolerating raw vegetables and other fiber-rich foods.sure these flours are wheat-free. It is common to find wheat added to other types of flours.